Although NeuroElf is mostly meant as a tool for additional analyses that are not implemented/covered by one of the more “general-use” fMRI packages, the fact that preprocessing a whole set of subjects can easily lead to error (and is also, in part, a sometimes time-consuming task, depending on the availability of scripts), I decided to implement a GUI to configure the usual steps of preprocessing following the workflow in the lab I'm currently working at.

To invoke the UI, enter spm5_preprojobs; without arguments. 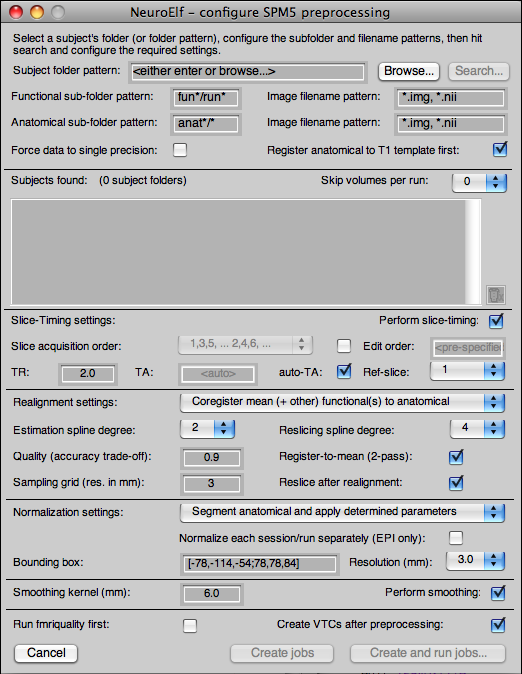 How to use the dialog

Here are some step-by-step instructions to follow for the first time user:

In case the scanner produces a low range of intensity values (e.g. the bulk of the within-brain voxels have values around 200), rounding errors during preprocessing are likely to over-shadow a significant portion of the signal by introducing additional (and unexplained!) variance (for values around 200 this means about half a per cent!). This can lead to reduced detection power on the first level, as well as slightly increased false-negative rates on the second level (higher error on the first-level beta estimates).

While single-precision floating-point images require twice the amount of disk capacity, compared to the typically used 16-bit integer images, this ensures that the impact of rounding errors during preprocessing is minimized!

Registering the structural image to the T1 template

As mentioned in the SPM help, certain algorithms (including the segmentation) only work reliably if the structural image is already in fairly good registration prior to the respective task. This initial registration is performed on highly smoothed versions of the images to allow a very rough fit to be performed (i.e. overlap of head with template). While this is still no guarantee for a successful final segmentation, I have found it beneficial for the average dataset, and thus this option is selected by default.

This option allows to remove volumes entirely (also from 4D datafiles, from which the data is actually removed!) to deal with the fact that the T2* contrast takes a few seconds to stabilize (and not all scanners/sequences drop those initial volumes).

For the actual settings used in SPM preprocessing, please refer to the SPM manual!

This is an optional run of fmriquality, which allows to later easily assess whether or not to keep all runs per subject or to remove specific runs (or subjects) entirely from the analysis (which, in the latter case, should be replaced by additional data!).

In case the data is to be analyzed with BrainVoyager QX or NeuroElf's GLM computation, it is necessary to convert the preprocessed images into VTC format (at this time, at least); so this is also the default.