While surface projection of results already makes a much larger amount of cortical activation visible “at a glance” (compared to showing single slices, for instance), it still requires at least two separate images for the lateral and medial portion of cortex (for one hemisphere).

One way to circumvent this problem is by producing what people in the field have coined “flatmaps”. As part of the processing, the surfaces are first hugely inflated, then “cut open” (kind of like the peel of an orange; usually with a small patch of surface being removed entirely to minimize later distortion) followed by flattening the remaining vertices into a two-dimensional plane (which usually includes some kind of distortion correction, given the high amount of deformation this procedure introduces). 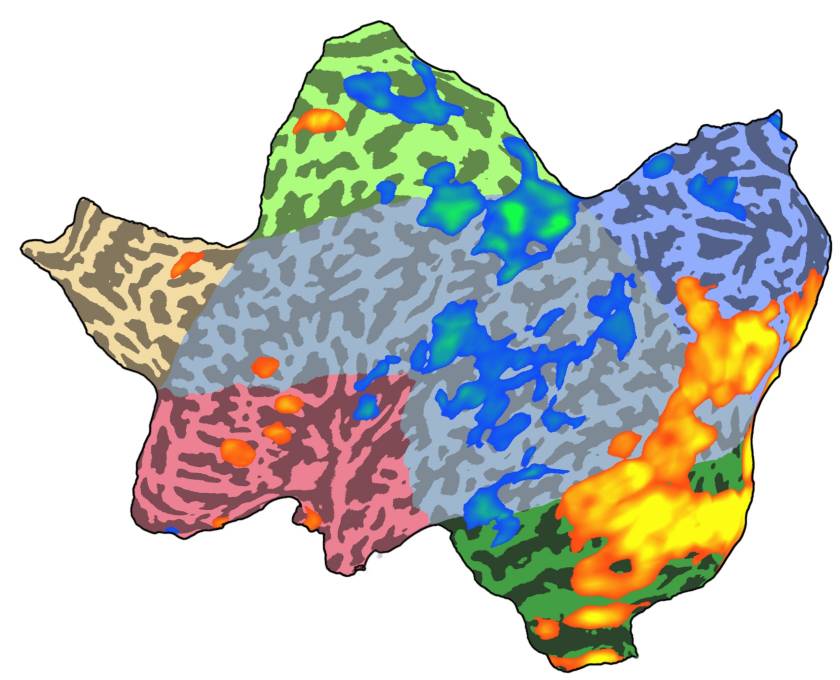 To create flatmaps such as the one shown above you need

In case you do not have a surface file of your own, you can use the surface files created during a call to neuroelf_makefiles which are a representation of the single-subject brain used in SPM, Colin_27 (the 163,842-vertices version of the left hemisphere of this dataset was used to create the above screenshot).

Two paths are described below: sampling existing statistical information (in VMP format) at the spatial location of folded cortex and displaying it as a flatmap or sampling timecourse information and creating statistics (currently only implemented in BrainVoyager QX!) and then using the required SRF and SMP objects from BrainVoyager in NeuroElf for a high-quality screenshot.

This is only required in case you wish to use NeuroElf for saving surface screenshots in EPS format!