Contrast images assess the likelihood of observing an average brain response (across subjects) compared to its standard error under the Null-hypothesis (of no or no differential effect), and correlations assess the likelihood of observing as little residual with a predicted linear increase in those responses linked to a covariate (regressor) under the Null-hypothesis of no effect of the covariate. While this is already highly informative, it does not necessarily answer these questions:

While even Mediation analysis cannot give definite answers to these questions, it clearly gets much closer to providing evidence for an affirmative answer to the first question and potentially also hypotheses for the second question. (Other methods trying to answer those questions include, for instance, TMS/rTMS which briefly or prolonged disrupt neural pathways, thus compromising the processing, hopefully leading to differential outcome/behavior).

As with other functions from the Analysis menu, Mediation analysis has a few requirements:

The RFX mediation analysis UI is available via the Single-level RFX mediation entry from the Analysis menu. When called, the following dialog pops up: 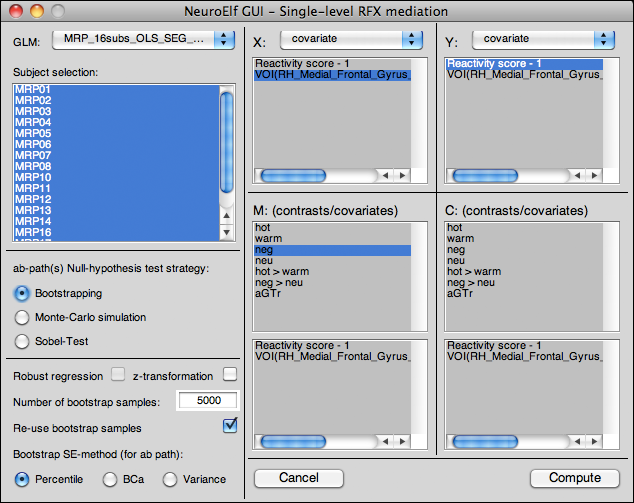 The dialog will automatically try to detect whether or not a combination of settings is valid and can be used (e.g. that X and Y cannot be the same term), and a warning message will pop up in case an invalid selection is made. Also, if a term for X and Y is selected, any equal terms in M and C will be deselected.