While hypothesis testing usually is done via formulating a Null-hypothesis (e.g. no systematic effect of differential processing of conditions), for which then a probability is given that the data could have been obtained if the Null-hypothesis were true (and a small enough p-value leading to rejection of this Null-hypothesis in favor of an alternative explanation: the difference in condition leads to a meaningful effect), false-positives can (and do!) still occur frequently. As one additional piece of evidence, it can be of great value to assess whether the region of interest (functionally or anatomically defined, or even just a peak voxel) shows a typical response profile in case the effect is observed in a classical stimulus-driven experiment (different stimuli or instructions to stimuli are contrasted).

One hopes to find a response shape (over time) that resembles the canonical response and, if such a shape is observed, one can have additional confidence in the findings (as opposed to observing more or less random fluctuations over time, which simply happened to “subtract” to a “significant” but possibly false-positive finding).

To use this feature in NeuroElf, the following files must be available:

To bring up the condition-based averaging plot, make sure the correct list of clusters is being displayed in the list of VOIs/clusters (the duration for the extraction roughly increases linearly with the number and size of clusters!), then select the Create VOI condition plots entry from the Analysis menu.

Once an MDM is selected and loaded, NeuroElf will examine the protocol files and show a list of conditions found in those files for selection. This is a good time to remove any conditions of no interest (fixation and rating periods, active baseline, etc.) as this will speed up the subsequent computations.

Next, the time courses will be extracted for all VOIs in all VTCs in the MDM file (subject selection is implemented at a later stage). This can take up to several minutes, depending on the number of VOIs and VTCs for which this has to be done.

In case this is required by the settings (motion parameters and/or temporal filtering), design matrices will be created for the runs, so that time courses can be filtered. 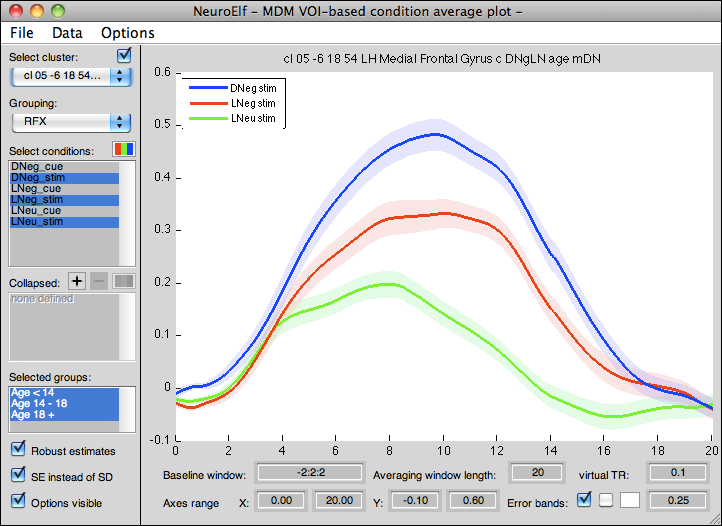 Using the File → Save axes screenshot… menu item, it is possible to create high-quality plots by choosing the Encapsulated PostScript (.eps) format and then loading the EPS file into a graphics program (e.g. Adobe Photoshop or The GIMP). The above screenshot is then rendered (at any desired resolution), which will give nicer images for publication (please click on the image to zoom and compare!): 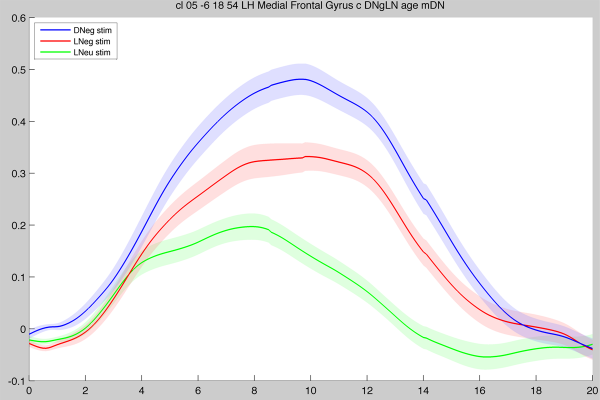