After performing the first-level regression of beta estimates (how much signal variation is due to the independent variables given in the design matrices, at best measured in a normalized way, e.g. after percent-signal-change transformation), it is usually required to compute random-effects statistics.

For this purpose the NeuroElf GUI also has a contrast manager. Watch the video on the right for a quick tour (also available in full-size resolution). 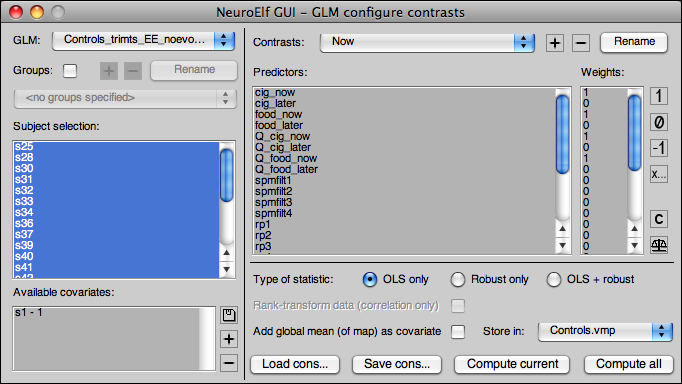 The dialog can be divided into the following control element groups: 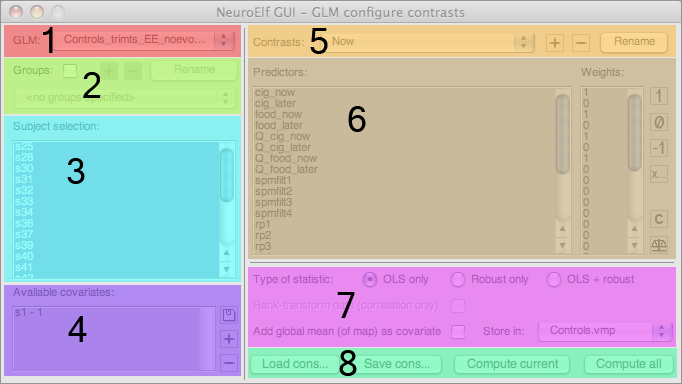 This dropdown allows to select one of the loaded GLMs to compute contrasts and correlations. When a different GLM is selected from the list, the names of groups, subject selection, covariates (2nd-level regressors), and contrasts stored in the .RunTimeVars field are loaded and set in the UI.

By default, no groups are configured (checkbox disabled). If group difference contrasts are needed, please first tick the checkbox in this group, which then configures two groups.

This group further has the following controls:

For each group in the list of groups, a sub-selection of subjects can be configured. When this selection is changed for any given group, the program automatically ensures that those subjects are not member of any other group.

This is simply a multi-selection listbox. For a single-group analysis, it simply configures the subjects which are to be included in the analysis (allowing to remove outliers). For a multi-group analysis, the selection is updated when another group is selected from the dropdown.

This group of controls allows to configure available and used covariates. The following actions are available:

Similar to the group configuration, this group allows to add, remove, and rename contrasts. If no contrasts are configured, only one set of contrast weights will be stored. Usually it is more convenient to configure multiple contrasts and have them available for regressions.

Typically, you would begin with main effects and then add differential contrasts. As soon as the first contrast is configured, the other buttons (+, -, Rename) will become available.

The two listboxes (Predictors and weights) are selection-linked. If the selection in one of the two is altered the selection of the other listbox will reflect the first selection. For the selected predictors, the weights can be set by using the buttons on the right side:

The c button clears all predictor weights for the current contrast; the balance button tries to automatically balance weights with different signs. This feature only works if all weights are integer numbers. For instance, if the weights are currently set to [1, -1, 1, 0] and the balance button is clicked, the weights will be reset to [1, -2, 1, 0], so that the sum will be zero.

This portion of the dialog allows the following settings:

With the buttons in this section the user can

While the contrasts/correlations are computed (especially with robust regression), the main UI will display the progress bar so that the main window remains responsive to user interaction (browsing any already available datasets).