Both heart beat onsets (R wave time points) as well as sliding beats-per-minute (BPM) are already interesting measures, but most publications refer to summary measures when GCR data reported. One of the most common of these is heart-rate variability (HRV). This function computes the power spectral contribution of frequencies in two specified ranges.

To use this function, you must already have pre-processed the data and also detected the heart beats (for a complete example see below). The onset data must be given as either a list of onsets (R wave time points) or a one-dimensional vector representing time which is then used to detect the onsets.

The onsets can either be given as a Ox1 vector of numbers (the function sorts this vector, so order doesn't matter) or as a Tx1 vector representing the heart beat data. If this is the case, the .freq option must be set!

The default for detrending the RRi-data is to remove both the mean and first-order polynomial (linear) fit of the signal. In case you wish to remove only the mean, you must set this flag to 'mean'. Please note that this does NOT influence the relation of the power contributions (.hfp / .lfp), and also does not (significantly) influence the raw scores of .lfp and .hfp, but naturally influences the relative contribution compared to the total power of all frequencies!

Please note that this, in effect, imposes a rectangular (low-pass) filter over the raw onset data, which removes frequencies higher than 30/BPM, that is if the (average) BPM for a list of beats is 80, frequencies greater than 0.375Hz will be (more or less) removed! It is thus mostly useful for quality control of the signal (e.g. to see how much of the total power is contained in those very high frequencies).

This flag forces the function to interpret the data as a Tx1 vector instead of an Ox1 list. The default is to determine this flag from the data: if the onsets data is a vector of few discreet values, this flag will be enabled, otherwise the data is interpreted as a list of onsets (time points).

For onset data, the default is to assume that onsets are given in seconds (1Hz). This can be changed (e.g. in case the onsets are in the sampling frequency of the original ECG data), and this flag must be set in case the given onsets are a Tx1 vector.

High(er) frequency range for which a power contribution is computed (default: 0.15Hz to 0.4 Hz)

Low(er) frequency range for which a power contribution is computed (default: 0.04Hz to 0.15Hz)

As an excerpt from wikipedia:

Welch's method is an improvement on the standard periodogram spectrum estimating method and Bartlett's method in that it reduces noise in the estimated power spectra in exchange for reducing the frequency resolution. Due to the noise caused by imperfect and finite data, the noise reduction from Welch's method is often desired.

Given that the signal is not circular in nature (there are potential problems with the discontinuity at the beginning and end of the signal), Welch's method is the default (at the expense of losing very low frequencies lower than 0.02Hz, given then default pwelch window size).

This flag configures the window size when (and if) the pwelch function is used. The default is the greater value of 100 and 1 / (2 * opts.lfreq(1)) to ensure that no low frequencies of interest are dropped.

If set to true (the default), the power contribution values will be set in relation (ratio) to the sum of the power of all frequencies (relative contribution of power).

This sets the re-sampling frequency which is applied when converting the raw RRi interval data to a continuous waveform (for further explanation see below).

If set to true (default is false!), the FFT/Welch's method will not be computed over the RRi (raw) data but over the frequency-transformed data (which is not skewed as much, see below for more information); as I didn't find any reference to this transformation, this is (currently) not the default.

The algorithm of the function comprises the following (conditional) steps:

For this example, we assume that the data was sampled at 500Hz and is stored in the third column of a text-based log file:

The following screenshot was taken during this example (while the second call to heartbeats is being executed): 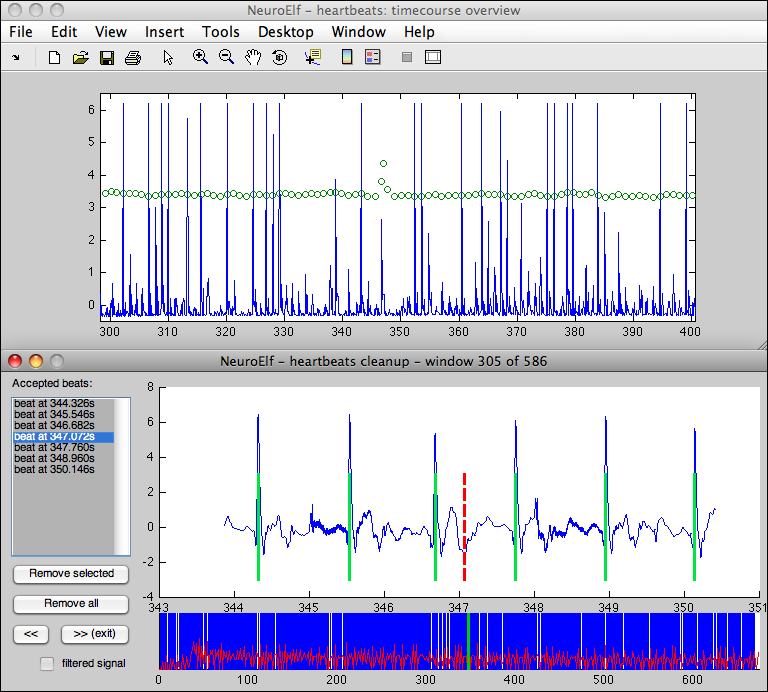 Note: if the function (heartbeats) is called twice with plotting enabled, the result of the overview of the first call will be re-positioned so that it can be easily used as input to the second pass.